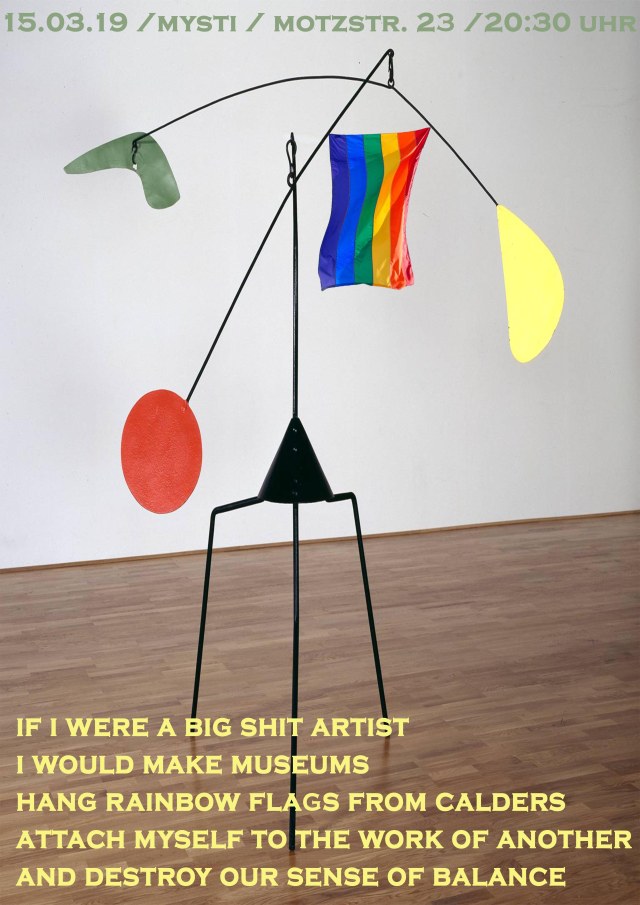 Write about Wojnarowicz… who in their right mind would do that? I am not a historian and I didn’t know him, so much of what follows is me having him as some white noise or a cloud of ashes in the wind around me… a body of work not finished being unfinished. That being said, my old gay romeo name ITSOFOMO so perhaps there are bits of him I am more adequately suited to speak of…

I worked for a museum that acquired a piece entitled Anonymous II which consisted of burying a skeleton marked only by GPS coordinates in the gallery, and the trouble of executing the idea is that of finding unidentified human remains. But Kiki Smith once had been gifted a human skeleton by David Wojnarowicz and she was relieved to unburden herself the creepy artifact that haunted her studio. A lonely corpse, this was the last art object I had wanted to see desperately: an object that wasn’t art when gifted to Kiki Smith, had lived a life as non-art human remains in a studio before being repurposed as art by another artist who simply needed a body in order to make an idea work. I’ve left the artist of Anonymous II nameless here, because I think it’s more important to name the doings of artists doing art’s doings than to name the artists specifically. I prefer dropping names out of the picture. Someone naming human remains as art Anonymous, let alone doing it a second time, can afford to be forgotten by someone like me doing something like this.

I lecture, not because I am good at speaking, but because I think it best embodies the now. Modernity is the feeling of being lectured—not necessarily being changed by that lecture though having endured it nonetheless. Its practice is that… telling you the world of its true self and what should become of it. It homogenizes, pathologizes and euthanizes. If indeed Silence = Death, now after years of we’re here we’re queer I‘d kill for some quiet. Pride politics never worked on me, because a great deal of my existence should be shrouded in shame. Gay liberation is not a requisite for good art making. Our presence is not attention-seeking, we the real queers know our way out of this world, how to manage a body remotely from a place that isn’t particularly likeable.

Forgive me, but I will never understand why German students who’ve had health insurance their entire lives attach themselves to the urgency of Act Up, which, above all, was a fight for health care. It was a fight over research funding and pharmaceutical prices. It was about being a mass of dying lovers left unspoken by Reagan and hardly uttered by Bush senior. But for me, AIDS was mostly a bad TV movie. A morality play on promiscuity in which sorry forgotten faggot sons come home to die crying, in mommy’s lap. When my classmates debated the problem of AIDS they insisted upon quarantine and I alone often imagined life to be better on this proposed AIDS Island. When you’re from South Dakota the idea of living on an island inspires only images of white sand beaches and a palm trees. Coconuts.

It’s hard to write of Wojnarowicz in this climate of AIDS activist nostalgia. It’s hard to know how to feel about what came of him… not simply ashes thrown in the wind before the White House but rather as a member of a fetishized group of artists. NYC has churned out so many memoirs of gay death that one might think that AIDS happened in this way, everywhere around the world, all at once, but it didn’t. That clever brand of not being silent has queer kids talking out of turn, acting as if they’re saying something new about Wojnarowicz or the wreckage of human rights in a post-equality frame. Wojnarowicz used the word queerness as “a wedge slowly separating me from a sick society.” No connection whatsoever in his work there… the queer doesn’t integrate, nor does what’s queer ever consume the entire body, no it’s the queer bits of the body that don’t belong to the whole. Really think: was there connection in the acting up of political funerals? Was throwing a lover’s ashes on the lawn of the white house an act of connected-ness, or rather an expression of the absolute nature of abandonment? That it doesn’t matter where we lay our dead, there is no rest to be had? Do they return to this White House to mourn those they left there? How might we mark that place where David and others had been spread illegally? Or is absence of a headstone the better expression of unmanageable loss?

What’s with boring art school kids doing David drag? Isn’t a self-taught artist like him supposed to shut them up? Silence can be the result of political awareness. Perhaps mistaken they might love David for all the wrong reasons. I believe watching all his houses burn brings us to another battlefield, one where rich kids might be unwilling to surrender to other lesser considered themes within his work… its easy to say that we came together to fight AIDS now that its more possible to live with HIV. It’s much harder to abolish the societal practice of imprisoning children in unhealthy homes. Family structure gestates the sickness of our world; the family is the incubator of our sense of doing things the way we do them here…

In a lesser module, let us first think of art and David’s punctuated commentary over its incestuous processes… how art ruled and directed by the rich loves to make readings of illegible bits: “The silence of Marcel Duchamp is overrated” David painted this on a wall as the backdrop of his own portrait. Words like that, refusals like that, helped me to love him alongside his very legible imagery of burning houses and fucking as work. However, these burning houses weren’t simply reference to a past:

The brilliance of Wojnarowicz is that he steps outside art so easily, his willingness to share so much of the intimate scenery of his life can leave one loving his work while still hating art and the reductions of possibility that come from calling something such. When I think of the life/work that Wojnarowicz produced, especially Memories that Smell Like Gasoline, I see not simply a connection to second wave feminist processes of sharing stories about sexual violence but also an even greater call to restructuring society, like those of a long hot summer in 1967, where if you cannot live in your house: burn it down.

What does the queer body do but desecrate the family? Queer art isn’t surplus so much as absence. The most defining feature is absence or perhaps avoidance in/of work? Queer is absence, in family photos, disaffected from the social matrix of professional life. When my bro-boss wants to know what I did on the weekend, do I really say that I put on a dress and got gonorrhea? Absence of vivid response on my end is the queer portion of this straight working life, my job… the appropriateness of my being in the workplace requires me to be boring with every weekend passing so I yawn and say netflix and chilled.

Shulamith Firestone penned the extremely potent Dialectic of Sex: The Case For Feminist Revolution which tragically some of you may not know so I will just say that in a mere side note of her case study she traces the failure of the Russian Revolution to create classless society to its “half-hearted attempts to eliminate the family and sexual repression.” Rooted in the science of birth control, Firestone insists upon an integration into full society by both women and children, namely into working and sexual arenas. She says “’raising’ a child is tantamount to retarding his development” (84) and goes on to illustrate how the mythology of happy childhood serves not the needs of children but the adults “living out some private dream on their behalf” (85). Childhood is still only reserved for those who can afford it and the de-legitimization of children as subjects who might seek employment to better their predicament is hardly on behalf of their human rights when we know that children are already part of our working world provided we not see them there. Think of not simply of Wojnarowicz’s traumatic memory of being doused in gasoline and taunted with fire, but what of altar boys working under the guise of ceremony within the Catholic Church? Or a world of children traversing borders suffering uncertainty in every classification we imagine basic—rather than allowing opportunity to work a way here we leave them to become in our unseen sexual culture just so we don’t have to see them working, the sight of which might cost us some sense of decency. Survival sex is a way of life for children and young adults who can’t come back home. Firestone’s bold invitation for children to integrate into public sexual life, wasn’t that children aren’t already engaged sexually but that they must be hidden from public in the process thereby making control over abuse nearly impossible especially when robbed of the capacity to participate in waged labor when the circumstances of their lives require them to save up for something else.

Was AIDS in NYC queer rapture? Is that what this nostalgia is looking for—sudden mass disappearance in this world where presence is mistaken or interpreted as endorsement, consent, and belonging? Alternately, couldn’t it be observed now in the American opioid epidemic, that another battle with government neglect and pharmaceutical liability is underway? Or have identity politics eclipsed compassion? Or whom we can imagine to blame and on whose behalf? Was gay activism just cruising, and who wants to extend love or even basic care to an unfuckable addict? And where are we in an art world who built with the money of the drug dealing Sacklers, what does your art do on their walls? Think of Nan Goldin yet again after struggle, she’s become a new voice within a body of people tired in the critique of art and its vampirism. I love the images of her protests at the MET, Guggenheim, and everywhere else they’ve scrawled the name… I love that an artist famous for her photography has now become a face in photos not particularly intimate, balanced or worthy of framing. Protest is the end of art… and any artist making art market cred with protest will be erased from history eventually or rather known only for doing such harm. But back to David, that slow moving wedge and who is to blame in this space “where people go into shock at the sight of our own bodies,” he says it’s the art world.